Georgia: At least 11 people were killed and 21 others injured as a fire ripped through a hotel in Georgia’s Black Sea resort, officials said.The victims died from inhaling fumes at the 22-storey Leogrand Hotel and Casino on Friday, regional Health Minister Zaal Mikeladze said. 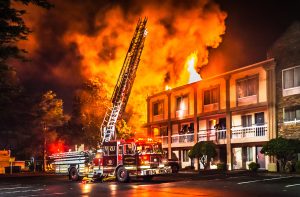 The hotel was due to host the Miss Georgia beauty pageant on Sunday. Officials said all the 20 contestants, who were reportedly staying in the hotel, were safe, the BBC reported.More than 100 people were evacuated from the hotel by emergency services.

The cause of the blaze, which took hours to extinguish, was not clear.Among those being treated are three Turks and an Israeli, a spokesman for the Batumi University Clinic said. Earlier, officials said 12 people had died.

Formal identification of the victims was under way, but an Interior Ministry statement said one Iranian and 10 Georgians were killed in the blaze.Prime Minister Georgi Kvirikashvili offered his condolences the families and promised an investigation to find the fire’s causes.