Indonesia:  Indonesian authorities on Monday raised the alert level for Bali’s Mount Agung to its highest level over fears of an imminent major eruption and have closed the island’s main airport until Tuesday Thick ash started shooting upto 3,400 metres into the air above the mountain’s summit on Saturday, driving east and southeast along the archipelago, causing dozens of flight cancellations, reports . 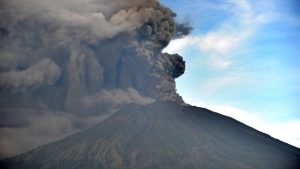 At Ngurah Rai International Airport, Bali’s main airport, flights were cancelled for 24 hours from 7.15 a.m., on Monday, stranding roughly 59,000 domestic and international passengers. “While the sun is shining and there is little sign of volcanic ash in the southern regions of Bali, evidence of volcanic ash at higher altitudes on aviation approach and departure paths has prompted the decision to close the airport,” Bali Tourism Board Chairman Ida Bagus Agung Partha Adnyana said in a statement.

Over the weekend, 24,000 residents were evacuated from across the island while Lombok International Airport on Lombok, the island due east of Bali, closed temporarily, said Ari Ahsan, spokesman for Ngurah Rai airport. Flights from Lombok resumed early on Monday. The National Agency for Disaster Management issued a Level 4 alert, recommending no public activities within 8 to 10 kms from the peak.

“The rays of fire are increasingly observed at night. This indicates the potential for a larger eruption is imminent,” it said in a statement on its Facebook page. Anyone within that distance of the peak was advised to evacuate. Tens of thousands of people were evacuated from their homes around Mount Agung in September when the alert was first raised. At the time, an evacuation zone of 12 km around the mountain was established, and travelers were warned to stay clear of the area. Bali’s main tourist centres are some distance from Mount Agung.

The island’s artistic hub, the small town of Ubud, is about 50 km southwest of the volcano, and Denpasar (where the airport is located) and the popular Kuta Beach are more than 63 km away. The last time Mount Agung erupted, in 1963, more than 1,000 people were killed, the BBC reported. Indonesia sits on the Pacific “Ring of Fire” where tectonic plates collide, causing frequent seismic and volcanic activity.