Shocking: Know why a young Engineer burnt alive by a stalker?

CHENNAI: A young engineer in Chennai was burnt alive last night allegedly by a former classmate who had been stalking her for about a month. S Induja, was set on fire at the doorstep of her home in the city’s Adambakkam area. 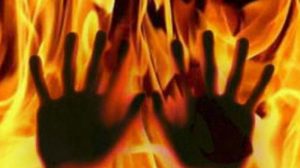 The man, a science graduate, has been arrested.Induja’s mother Renuka and younger sister Nivedita, who tried to save her, are in hospital. Her mother suffered 49 per cent burns and her sister is in the ICU. The man had allegedly been harassing Induja for the past month.

The police say while Induja’s family says she had rebuffed him, he has claimed that he was in a relationship with Induja and they had plans to marry.Last night, around 8:45 pm, the man went to Induja’s home and demanded to speak to her but the family refused to let him in.According to the police, he splashed petrol on Induja and used a lighter to set her on fire.

Induja’s father was not at home at the time. Neighbours, hearing cries, rushed to help the family and took them to the hospital.Some neighbours claim the ambulance arrived 40 minutes later.